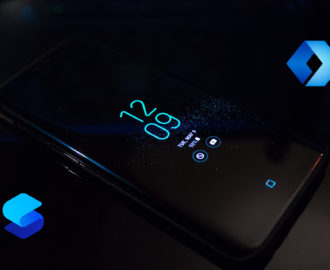 The Android launchers that come with your phones are usually bland. That's why third-party launchers from well-established companies and independent developers are proliferating. Of course, they also tend to confuse us. So we compare one on each side: Microsoft Launcher and Smart Launcher 5.

Microsoft Launcher promises to provide a seamless syncing experience for Windows fans and those who are used to it. This means you can now sync and access data between devices and even with Microsoft applications.

Smart Launcher 5 will allow you to automate things. You do not waste time organizing applications or searching for information. It also takes a modular approach, which is very different from what I've seen on some other launchers.

By launching Microsoft Launcher, you are prompted to sign in with your Microsoft account. This will allow you to send web pages from your phone to a computer, to choose images from your phone as wallpapers on your desktop and to view pictures of the phone on your computer. I would also recommend installing the Your Phone Companion application on Windows to further synchronize notifications and phone messages.

If you're at the heart of the Microsoft ecosystem and you use applications such as To-Do's, Sticky Notes, and Outlook Calendars, it's a boon. Swipe right on the Home screen to access widgets and shortcuts in the My Feed menu.

You can view Microsoft tasks here, create or view reintegrated notes that also integrate with OneNote and upcoming calendar events. It's amazing. And you can also add Google Calendar. Scroll down and select Edit this view to begin customization.

Finally, you can also add an unlimited number of widgets in the Preview tab to improve your productivity and save valuable time.

READ  How to Save Battery on Samsung Galaxy Active 2

Smart Launcher 5 starts with some application permissions, and then immediately gets to work. You can choose from three different layouts. A modular approach in which the location of the application drawer can be changed from the bottom to the sidebar. You can later use drag and drop to rearrange these items.

There is a dedicated widget page that you can drag from the right. This makes it easy to access widgets and reduce the size of the home screen. Smart Launcher comes with a clever search that reminds me of the Sesame shortcuts. You can not only search for contacts and applications, but also information from the Web. When I search for John Wick, a link to Netflix (which I have installed) and YouTube videos will appear. A search on the Yonex racket displays the results of the purchase applications.

All apps have been carefully organized into categories that you can access from below. Unfortunately, several apps have been misclassified, but that's not a problem. You can rearrange them easily. Smart Launcher 5 makes a point of positioning all the options in the lower bar for easier operation. The same goes for the intelligent research we saw above.

Microsoft Launcher also offers a smart search where you can search for contacts, tasks, documents, people, and web links. By clicking on other search results, you access the browser options.

The search bar widget comes with a shortcut for the camera in Microsoft Launcher. You can also scan barcodes with it. The clock widget supports weather information. We saw sliding from the left open the Microsoft application widgets. Two other tabs to note are news that can be customized by niche and location, and Timeline, which connects to the Windows Timeline to view the latest documents and other changes.

Smart Launcher 5 will extract weather data with your upcoming events, such as flight details in the clock widget. It also features a customizable news section.

Unfortunately, there is no way to choose geolocated news in Smart Launcher 5.

Freedom of the wharf

But what I like is the ability to swipe up to reveal an extra widget area in Microsoft Launcher. Unfortunately, there is no way to customize it. However, it offers the most common scales.

Where Smart Launcher 5 has an integrated theme engine and a gallery of wallpapers, Microsoft Launcher offers wallpapers for its Bing search engine. Microsoft also offers a shortcut widget button that you can tap to change the wallpaper on the fly.

Smart Launcher 5 offers more ways to customize the appearance of various elements. You can add a blur effect, hide the navigation bar, other shapes of icons that I have not seen yet in other launchers and contextual widgets. The last is pretty cool – tap twice on an application to launch its widget directly. An example might be the Apple Music widget.

You can also customize the icon layout, folder design, and enable notification badges in Microsoft Launcher. These features become pretty standard on all popular launchers.

Microsoft Launcher is totally free. It's hard to beat. Smart Launcher 5 is fantastic, but the free version comes with advertisements. After all, developers have to make a living.

Fortunately, the professional version is a one-time purchase of 2.29 USD that deletes ads, allows to add multiple widgets on the home screen, unlocks contextual widgets and offers even more ways to customize your phone. Cool.

It all comes down to this. Many features such as news feeds, gestures, themes and wallpapers, icons and widgets, as well as some common screen and home screen options 39, icons overlap. The greatest strength of Microsoft Launcher lies in its ability to integrate deeply with other Microsoft applications and the Windows operating system. Smart Launcher 5 is a refreshing version of the launchers with so many ways to customize that you will be surprised. Choose one, and you will not go wrong either.

Then: Want to know more about Microsoft Launcher? Here is a detailed guide on how it works.