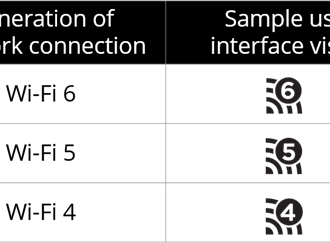 WiFi 6 has become a new buzzword! In addition to knowing that it is the sixth generation WiFi behind the 802.11ax specification, we have little idea about this technology. So, what does this technology hold for us and how is it different from its previous iterations? Here are some of the questions we will try to answer in the post today!

Wi-Fi 6 is a new labeling convention developed by Wi-Fi Alliance, which is a nonprofit organization that promotes Wi-Fi technology and certifies Wi-Fi products according to certain standards of interoperability. The new labeling is considered the fastest version of the Wi-Fi technology we have been using for more than a decade now.

The organization came with the convention because previous names were hard to remember (the real name being 802.11ax). The currently used Wi-Fi, 802.11ac, is also known as Wi-Fi 5 and supports speeds up to 3.5 Gbps. Wi-Fi 6 will support 9.6 Gbps, more than double the 3.5 Gbps you get with Wi-Fi 5.

READ  How to Blur a Part of Picture in Paint 3D

The ubiquity of Wi-Fi and its ability to complement other wireless technologies like artificial intelligence slowly translate the vision of connecting everyone and everything in reality. At the same time, the popularity of Wi-Fi has created very diverse and densely populated Wi-Fi conditions. This requires new technological advances to meet the needs of users. Wi-Fi 6 believes that it has answers to this because it will have the ability to allow Wi-Fi devices to work efficiently in the most dense and dynamic connectivity settings.

In addition to robust connectivity and speed, users demand stable performance in the most demanding Wi-Fi environments. Wi-Fi 6 promises to provide this, as well as other benefits.

In addition to the above, devices certified by this technology, aka Wi-Fi CERTIFIED 6, will meet the highest standards for security and interoperability. In addition, they will also reduce battery consumption, making it a preferred choice for the Internet of Things (IoT) and emerging applications like,

The reason why Wi-Fi 6 is considered the inactive choice for the development of the Internet of Things is that it supports TWT (Target Wakeup Time) technology. The technology allows devices to determine the number of times they can be allowed to send or receive data, which allows 802.11ax (WiFi 6) access points to effectively increase the standby time of the device and conserve considerably the life of the battery. This idea remains an essential feature of the development of IoT. In addition to this, Target Wake Time allows access points and wireless devices to negotiate and set specific times to access support. This optimizes the spectral efficiency of the collectors and reduces conflicts and overlaps between users.

Already, we are experiencing a demand for increased capacity and throughput. This will continue to grow as users will continue to add more wireless devices to each network and expect faster response times for their activities (streaming favorite videos or uploading files large). our requests will appear as the most viable option.

How to Enable OSIE Vision Effect on Realme Devices
Windows Store error 0x80072F05 – The server stumbled
How to loop PowerPoint Slides in a presentation to make them run automatically
Where are My Documents in Windows 10?
Difference between NTFS, FAT, FAT32 and exFAT file systems
How to Find Songs Used in TikTok App