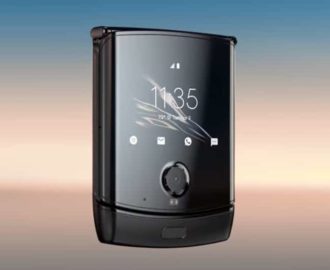 The collapsible Motorola smartphone is finally here and it's amazing. Before you start listing the details of the device, we must first get the name of it. It's called the Motorola Razr. Yes, the letter r is also tiny, as Motorola wanted. The Razr flip phone style is one of the best folding phone models we've seen so far.

In simple terms, the new Razr looks like one of the most iconic flip-phones of all time – the original RAZR. The company did a great job trying to recreate its flip-phone OG RAZR. And, in doing so, they even solved some problems on other foldable phones such as the Galaxy Fold. More on that later.

Of course, this is not the company's first attempt to revise the RAZR brand on its phones. A few years ago, Motorola launched a group of Android smartphones bearing the Razr brand. However, having no way to differentiate the other flagship products at the time, these Droid RAZR phones were not selling very well. Nevertheless, now that the Motorola Razr is foldable, here is everything you need to know about the device.

Given the price of the phone, you might be slightly disappointed with the specifications. However, as it is a first generation, it is not so bad.

These are the specifications of the Motorola Razr. As mentioned, the size of the battery is just 2510 mAh, which is relatively smaller than most other smartphone batteries on the market. Although the device is not yet available to buyers, we believe that the battery life will be below average. However, this move is understandable because the Motorola Razr is thin enough even if it is folded.

There is also a midrange chipset under the hood that is the Snapdragon 710. This processor is found on midrange devices from Xiaomi and some other manufacturers. Although the chipset is absolutely not bad, it is certainly not as powerful as the Snapdragon 855 or 855+ that we hoped to power the Motorola Razr. Fortunately, 6GB of RAM should allow the device to hold well for a few years.

READ  How To Clear The iPhone/iPad Cache

In terms of screens, the 6.2-inch foldable plastic main screen is one of the biggest features of the Motorola Razr. In addition, as we mentioned at the beginning, the Razr somehow solves some of the biggest problems on other foldable phones. In particular, thanks to the wonderful hinge technology, there are almost no visible creases when the screen is unfolded. We say "almost" because you will always notice that the fold exists in some situations, but it is not as pronounced as that on other foldable phones.

In addition, the Motorola Raze is very convenient for the pocket, which is not really the case with the Galaxy Fold or the Huawei Mate X. Even folded, the device manages to stay quite thin.

Check out Motorola E6 Plus and Motorola One Zoom Wallpapers

Given the mediocre specifications of the device, you might not like the price which is set at $ 1,499. The Motorola Razr would go on sale in the United States in January 2020. Unfortunately, we have no specific date for the future. Pre-orders for this device will begin Dec. 26 and it will likely be a Verizon exclusive in the US at launch.

The Motorola Razr should also be launched in India. However, the company has not disclosed any dates or prices for this device in India.

What are your thoughts on the Motorola Razr foldable? Let us know in the comments section below.

Read more: Why not buy the Samsung Galaxy Fold

How to Move Files Between Google Drive, OneDrive, and Dropbox Using MoveBot.io
HardLink Shell Extension: Create Hardlinks, Symbolic Links, Junctions, Volume Mountpoints
How to create awesome Calendars with Microsoft Publisher
5 Best Hex Installer Plugins For Devices With One UI
How to hide or minimize the Search Bar in the Office 365 Title Bar
What Are Labels in Google Keep and How to Use Them Effectively